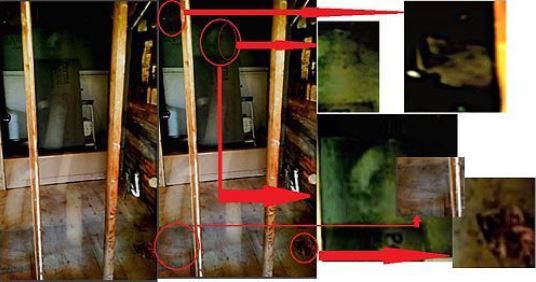 This photo was taken in an old apartment building where my husband was doing some construction work. So while he worked I decided since I was seeing things that I would take some photos and this is some of what I got.

This is another photo that I took of the fire of the old center hall colonial mansion that burned down when I lived on the property there. You can see in the blow up of window part that there appears to be a woman and a child in the window of the house. I was there, the house was engulfed in flames, smoke everywhere so it would have been impossible for anyone to have been inside of that house while it was burning. 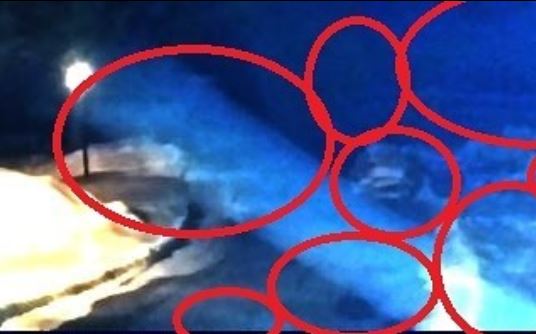 If you look closely inside the circles there appear to be people in them. The one in the center appears much darker than the rest. This was taken of my surveillance camera screen. I saw it on the screen and took of a photo of it to see if it would come out and it did.

I don’t usually use orb photos but this one I have to. I was taking photos on my front lawn one night and I snapped this one. I had never taken a photo of an orb other than the ones that appear whitish in color. This is the original color of the orb when the photo was taken. I looked it up and the reference I used stated that this was a warning color. Funny thing is that the house that burned down in the previous photos burned down a couple months after this picture was taken!

I do hope that you all enjoyed these photos! There are many more to come as I have been at this for a while and have many, many to share!

I do spirit photography, automatic writing, analyzing and research of spirit photography. I started this blog in hopes to share my craft with everyone else and maybe to network and work with others that are interested in this field. View all posts by myparanormalphotos